What are Sodium Adsorption Ratio and Sodicity? 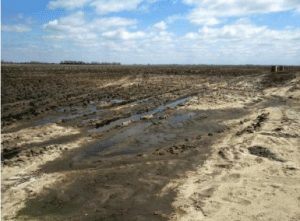 Soil sodicity is caused by excessive saturation of Na+ ions at the soil cation exchange sites (negative charges of clay and humus particles that attract positively charged chemical ions). Sodicity directly affects soils as high Na+ levels compared to calcium (Ca2+) in combination with low salt levels can promote “soil dispersion”, which is the opposite of flocculation. Soil dispersion causes the breakdown of soil aggregates, resulting in poor soil structure (low “tilth” qualities).  Due to the poor soil structure, sodic soils have dense soil layers, resulting in very slow permeability of water, air and other contaminants through the soil profile. It is important to note If Na+ is present as a salt, it will not cause dispersion as the positive charges of Na+ ions will be neutralized by the negatively charged chemical ions such as sulfates (SO42-) or chloride (Cl–). However, due to the constant exchange of positively charged ions like Ca2+, magnesium (Mg2+) and Na+ between soil water and the soil clay and humus particle negative charges, high levels of Na+ based salts in the soil water can result in sodicity as more negative charges could get saturated with Na+.

Unlike salinity, in most cases there are no clear visual symptoms of sodicity, which could be seen at the soil surface. The best way to know about the soil sodicity issues is by sampling the affected areas and getting them analyzed from a soil testing lab. Historically, Exchangeable Sodium Percentage (ESP) test has been used to analyze soils for sodicity. However, over time, ESP has been replaced by Sodium Adsorption Ratio (SAR) in most of the regional soil laboratories. As a result, SAR values can be substituted for ESP (Oster et al., 1999).

Soil SAR is a measure of the ratio of sodium (Na+) relative to calcium (Ca2+) and magnesium (Mg2+) in the water extract (solution phase) from a saturated soil paste (Eq. 1). The units of Ca2+, Mg2+ and Na+ are milliequivalent/liter [meq/L) or mmol(c)/L].

For classification purposes, a soil is considered sodic if SAR levels are 13 or more, however, these values are just general guidelines and don’t imply that the lower numbers will not result in detrimental effects related to soil sodicity, especially for shrinking and expanding clays. Based on the findings of NDSU research for shrinking and swelling type of clays, if soil results for SAR are more than 5 and the Electrical Conductivity (EC) is less than 2 millimhos per centimeter (mmhos/cm), movement of soil water may be restricted due to swelling, dispersion or both.

Do you have an excellent resource that isn’t listed here? Submit it for consideration. 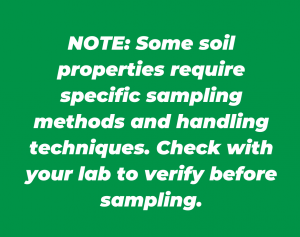