Soil Health Nexus > Latest news > Soil Health > How do we collectively conceptualize “soil health” and how do we use that to guide meaningful research and extension?
tweetshare

How would you define “soil health”? How do you think others would define it? You have likely seen people using the term “soil health” to refer to concepts that you personally might not personally think fit the definition of soil health. You are not alone! Inconsistent definitions of soil health can make communication difficult and even confusing.

Having run into this problem many times, a group of us from The Ohio State University recently set out to get a better grasp of how we as an agricultural community perceive and assess soil health. Specifically, we wanted to know 1) how high of a priority soil health is to farmers? 2) how are we all thinking about soil health?, and 3) how useful do farmers find current soil health tests? We used a survey to target three groups within this community: soil health scientists at land grant universities, NRCS employees, and row crop farmers in the Midwest. We received a total of 265 complete, usable responses from 12 states: Ohio, Michigan, Indiana, Illinois, Iowa, Wisconsin, Minnesota, Nebraska, North Dakota, South Dakota, Kansas, and Missouri.

How important is soil health to farmers? 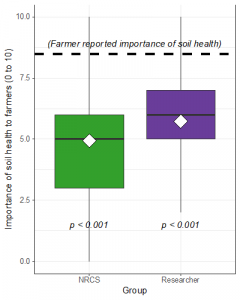 First, we wanted to know how important soil health is to farmers and whether non-farmers accurately perceive that importance. On an importance scale from 1 to 10 (with 10 being the highest), farmers ranked soil health as an 8.5 out of 10 (Figure 1)—really important! However, both of our non-farmer groups underestimated how important soil health was to farmers. On average, NRCS personnel and agricultural researchers estimated that farmers rank soil health at 4.9 out of 10 and 5.7 out of 10, respectively. These non-farmer groups gave a wide range of responses to this question, ranging 0 to 10 for NRCS and 2 to 10 for researchers. More importantly, our results show that soil health has broad, often unrecognized levels of support among farmers.

Are we all thinking about soil health in the same way?

One of the more important considerations for communicating about soil health is whether there is agreement about the effects of improving soil health. We asked our survey respondents to link to soil health to 6 broad themes. 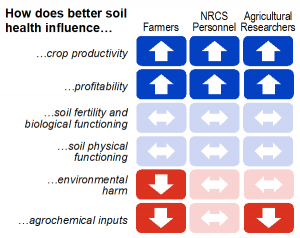 An example of how to use and implement these findings: if a researcher wants to communicate with farmers about the benefits of soil health, an impactful messaging strategy would emphasize the effect of soil health on agrochemical inputs. Both researchers and farmers are more likely to see this relationship as one-directional and therefore more straightforward (Figure 2). For concepts with broad agreement (e.g. crop productivity and profitability), successful and straightforward communication across groups is more likely.

How useful are current soil health tests for farmers? 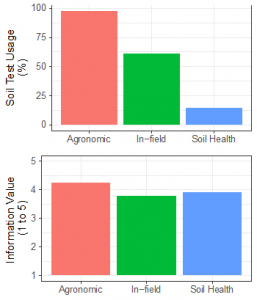 Figure 3. Farmer-reported soil test usage (top) and the perceived value of information from each type of soil test (bottom).

Increasingly, lab-based soil health tests are used to assess soil health, often supplementing other more conventional soil testing methods. We wanted to determine how frequently soil health tests are used and how valuable the users found the results from those tests, relative to other forms of soil testing. Specifically, we compared traditional agronomic tests, in-field soil tests, and soil health testing. Agronomic soil tests (e.g., pH, organic matter, extractable nutrients, etc.) were the most commonly used, with nearly all farmers having recently used them (Figure 3). In-field soil tests (e.g., shovel, feel, etc.) were the next most common form of soil test with over 50% usage, followed by soil health tests, with only 15% usage by farmers. Farmers generally found the information from these tests equally valuable, scoring about a 4 out of 5 on a 1-5 information value scale (with 5 the highest value). Thus, while soil health tests are infrequently used by farmers, those that do use them find them valuable. This suggests that the barrier to their use is not one of value, but is likely other considerations, such as cost or availability.