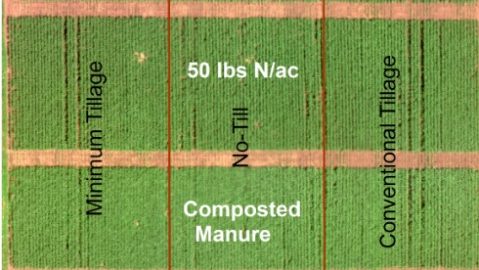 In 1987, a long-term cropping systems study started at the NDSU Carrington Research Extension Center.  Three sets of 4-year crop rotations are replicated three times each year. The ninth cycle ended in 2016.  This article will discuss some of the effects of using composted beef manure on soil properties and selected crop yields. This study is located on a Heimdal silt loam soil. The main plots are 180 ft. by 300 ft. so field scale equipment is used.

The fertilizer treatments are: (1) urea broadcast applied each spring to all plots, except field peas and soybeans, at 0, 50,100, or 150 pounds of N per acre and (2) composted beef feedlot manure applied once at a rate of 200 pounds of N the first year of each 4-year cycle (once every four years). These treatments are imposed in strips perpendicular to the three tillage systems: conventional, minimum tillage, and no-till resulting in 12 sub-plots within each crop.

Composted beef feedlot manure is applied at a rate of 200 pounds of N the first year of each 4-year cycle.

The plots are soil sampled every year and phosphorous and sulfur were blanket applied to all non-manure plots when they fell out of the medium test range.

Composted beef feedlot manure is an excellent economical fertilizer if available.  Crop yields are equal to and some times greater than equivalent amounts of commercial nitrogen fertilizer. Find out more about the economics.

The goal of the study is to determine the effects of tillage system, N fertility level and source, and crop rotation and the combination of these parameters have on crop grain and biomass production, crop diseases, soil nitrogen, soil phosphorous, soil organic matter, and soil pH. The study at the CREC is one of very few long term cropping systems studies in North America comparing crop rotations, tillage systems, and fertilizer rates and sources.