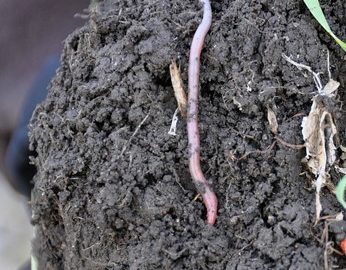 If manure increases formation of larger (macro) and more stable soil aggregates, several benefits may result for fields fertilized by manure compared to commercial fertilizer including:

The Manure and Soil Health blog will unpack some of the potential benefit of manure to soil quality by reviewing past research for clues as to manure’s benefits. Several research studies have documented manure application impact on improvement of soil physical properties. This blog article examines published research by Charles Wortmann and Charles Shapiro, The Effects of Manure Application on Soil Aggregation.

Wortmann and Shapiro conducted studies at three separate Nebraska farms to explore the impact of composted beef manure, stockpiled beef manure and swine manure on soil aggregate size.  Their hypothesis proposed that manure will produce increased macro-aggregate formation with the intent of learning 1) how quickly these aggregates form, 2) impact of alternative manure sources, and 3) the residual effects of manure on aggregates.  Three studies were conducted with silty loam or silty clay loam soils. Feedlot manure solids was applied at 20 to 22 dry tons/acre (roughly 40 to 44 wet tons/ac) and swine manure at 1.2 dry tons/acre (roughly 4800 gallons per acre if manure is 6% solids).  Four conclusions were drawn providing clues about manure’s benefits. All macro-aggregates increased by 10 to 20% for manured vs commercially fertilized soils (see Figure 1).  This increase was consistent across all soil types evaluated.  A Michigan State Extension publication suggests that “When manure … is added to the soil it is quickly colonized by millions of bacteria…bacteria producing large quantities of polysaccharides.  These polysaccharides function like sticky glue in the soil and can actually stick particles together into aggregates.”

The formation of macro-aggregates occurred with all manures with some advantage for compost and similar effects for raw feedlot manure and swine slurry.

The swine manure’s solids application rate was only 6% of that of feedlot manure but still achieved very similar benefits.  This might suggest that achieving the physical soil property benefits may be more dependent upon the rapid growth in soil micro-biology and less dependent on the total solids in the manure.

Water-stable macro-aggregates formed within 15 days after manure application, persisted over a 7 month observation period, but were no longer found on a separate tilled site that was without compost for 5 years.

The effect of manure or compost on macro-aggregate formation soon after application (first observation made at 15 days) suggests an immediate value from manure application.  The study observed this benefit lasted at least 7 months but disappearing five years later.  Other research has suggested this benefit lasts longer in no-till fields.

Phosphorus was observed to concentrate in the water-stable macro-aggregates, twice as great in the large aggregates as the whole soil P level.

This may provide additional protection resulting from manure for holding P in the soil and reducing P in runoff.  However, previous research has documented that P movement from cropland is connected to soil surface P levels.  Managing manure to keep soil P levels low, near levels required for optimum crop production, remains our best practice for protecting water quality. But manure’s large aggregate building response and P concentration in those large aggregates help protect water quality.

This article demonstrates the take home message that manure improves the physical characteristics of our soils not experienced with commercial fertilizer.  These improvements to the soil aggregates opens the possibility for environmental and economic benefits. This possibility will be explored in future MaSH blogs.