*This article was originally published by Iowa State University on 10/17/19 and shared here with permission. 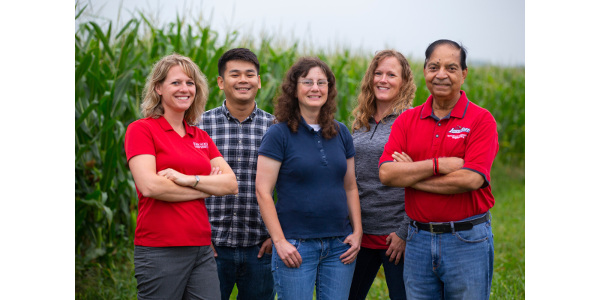 Professor Michelle Soupir (left), and the team of Iowa State researchers in the Department of Agricultural and Biosystems Engineering who have been involved with a long-term study on the impacts of fertilizing cropland with poultry manure. Others, from left: Ji Yeow Law, research associate; Leigh Ann Long, research associate; Natasha Hoover, research associate; and Rameshwar Kanwar, Charles F. Curtiss Distinguished Professor in Agriculture and Life Sciences, who initiated the 20-year project. (Photo by Chris Gannon)

“The data show that, when properly managed, poultry manure is a great source of nutrients to enhance crop production and can also benefit soil and water quality,” said Michelle L. Soupir, associate professor of agricultural and biosystems engineering, who joined the research team in 2009.

And Iowa has a good supply: The state’s consistent top placement in poultry production results in enough poultry manure annually to treat as many as 40 percent of the continuous corn acres or 7 percent of the total row crop acres, according to calculations by Soupir’s research team.

“This is the first and only study of its kind that we are aware of,” said Kevin Stiles, executive director of the Iowa Egg Council, which for 20 years has been the project’s primary funder. “I give our board a lot of credit for having the vision to fund this long-term effort to objectively evaluate the potential advantages and impacts of poultry manure for the cropping systems we use in Iowa and the Midwest.”

The research began in 1998 with 11 plots on Iowa State’s Agricultural Engineering and Agronomy Research Farm near Boone. In its first decade, experiments compared three treatments in a corn-soybean rotation. A commercial fertilizer, urea ammonium nitrogen (UAN), was applied at the recommended rate of 150 pounds per acre and manure was applied at two rates, one that reflected the commercial fertilizer rate and the other, for comparison, at double the recommended rate.

In the research’s second decade, the focus was on comparing treatments on continuous corn. Manure and UAN were applied at the recommended rate of 200 pounds of nitrogen per acre for continuous corn, along with a half application rate for comparison.

Soil carbon – another common soil health measure — did not show increases, but the researchers point out that soil carbon changes can be difficult to quantify during the time-frame of the study.

“During the continuous corn phase, average revenue returns increased by about 15 percent for manure treatments compared to UAN, due to the increased yields,” said Ji Yeow Law, a research associate who analyzed crop yields and economics for the study.

Though manure costs were generally higher, the manure was still more profitable during the continuous corn phase, when considering the total production cost per bushel of output. The higher revenues linked to the manure treatments in the continuous corn system suggest that it may be more economical to transport manure over greater distances from poultry facilities to farms.

He noted economic results will vary depending on fertilizer prices, manure price and availability. Manure value also will vary due to different nutrient levels. The researchers found wide variation in manure nutrient levels, leading them to emphasize the need for regular manure testing.

“The economic benefits of poultry manure are likely to be lost if landowners also apply UAN as ‘insurance,’ adding nitrogen fertilizer that’s not needed,” said Soupir.

“This also applies to the positive water quality benefits we found.”

Nitrate-nitrogen losses measured in tile drainage from manured plots were 7 to 16 percent lower from the continuous corn and corn-soybean plots, respectively, than from plots commercially fertilized at comparable rates.

“The research shows a number of important benefits from using poultry manure,” said Soupir. “It also confirms the importance of using good conservation and nutrient management practices to avoid phosphorus buildup when manure is applied at the nitrogen rates.”

The results are detailed in the article, “Long-term impact of poultry manure on crop yield, soil and water quality, and crop revenue,” in the December 2019 issue of the peer-reviewed Journal of Environmental Management, online now. Co-authors with Soupir and Law are Natasha L. Hoover and Leigh Ann M. Long, research associates in the Department of Agricultural and Biosystems Engineering; and Rameshwar Kanwar, a Charles F. Curtiss Distinguished Professor in Agriculture and Life Sciences and professor in ABE.

Stiles said the Iowa Egg Council intends to support continuing the research and expects to recruit additional partners. Future plans, which are already underway, include shifting the application timing from the spring to the fall and studying microbial water quality in drainage from the poultry manure applications.